Co-opetition is the new buzzword.  Can businesses become more competitive when they cooperate?  Based on Game Theory, Co-opetition by Adam Brandenburger & Barry Nalebuff presented a revolutionary mindset combining competition and cooperation.

As one business uses its strengths and exploit the weaknesses of its competitors, the theory is that it elicits a response from the competitor.  The competitor might, for example, shore up the vulnerability and then attack the first business by marketing its superiority in ways the primary business is lacking.  As the cycle continues, each firm would improve and grow.  As in Game Theory, a move by one player influences the movement another player makes, the fate of companies would also become interdependent.

Brandenburger describes an exercise he uses with his students at Harvard to demonstrate how quickly Game Theory can become involved.  He takes a deck of cards and hands out the 26 red cards to the students and keeps the 26 black cards.  At stake is $100 to anyone – student or teacher – that can turn in a red and black card pair.  Negotiations begin with the only rule is that students can’t bargain together.

With the known variables – how many cards are available and who controls them – decisions are relatively simple.  Nobody has the upper hand.  All the deals will eventually be made, and there’s no penalty for waiting to see how things should turn out.

However, let’s take 5 of the black cards out of the equation.  Now, the balance of power favors the teacher holding all of the black cards.  The students will be tempted to make deals earlier in the negotiations or risk missing out on getting a black card.  As permutations change, strategy and approach can become involved.

Co-Opetition in the Business World

In the business world, co-opetition can also work in a more cooperative state.  Rather than thinking of competition as a zero-sum game where one company takes all, the goal becomes to strengthen each partner to make everyone more profitable.  This might mean cooperation among customers, suppliers, competitors, and companies that sell complementary products.

It works when the sum is greater than the individual.  As in the example, using red and black cards, however, when the balance of power shifts, it can be challenging to create the right mix to provide a win-win scenario for everyone.  The model created by Brandenburger and Nalebuf takes into account the variable inputs that influence companies to compete or cooperate.  Knowing which forces will lead to cooperation and which will lead to competition, and to what capacity, helps to make strategic decisions. 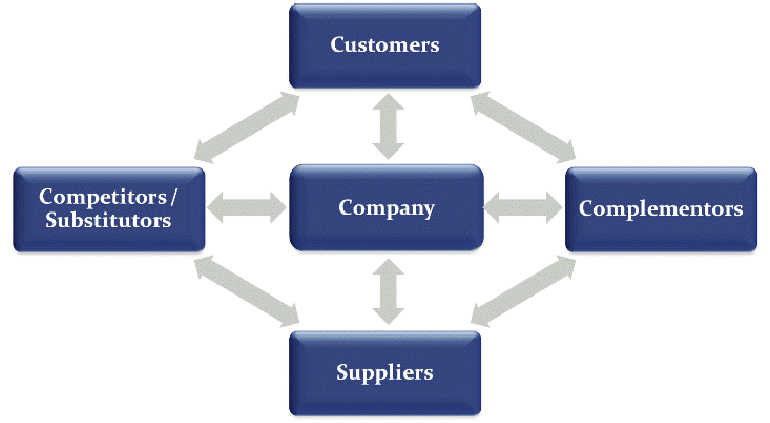 The Benefits of Co-opetition in Business

Co-opetition occurs regularly in the tech sector, where cooperation between competitors can create synergies between hardware and software.  Co-opetition between two technology companies can increase user growth for both companies due to cross-channel promotion or platform acceptance.  Two competitors may have complementary strengths and work together.

Another example might be where two startups are trying to enter a market dominated by an established company.  By joining forces, they may be able to make more significant inroads or form a more reliable company that might position itself for acquisition or block a competitor’s growth.

BioNTech and Pfizer are collaborating on the development of a COVID-19 vaccine.  Pfizer is handling clinical research, development, manufacturing, and distribution.  BioNTech will contribute to the vaccine candidates.  Together, they will speed up the development process.  Besides helping the control of the coronavirus pandemic, both companies stand to benefit.

There are other examples of co-opetition as well.  Amazon and Apple both benefit from an alliance that allowed the distribution of eBooks using a Kindle app on the iPad rather than just through the Kindle.

Google-backed the not-for-profit Mozilla’s Firefox browser even though it was a competitor, and Chrome was already the world’s most popular browser.  It did so to limit growth from Apple Safari and Microsoft Internet Explorer and Edge.  Firefox agreed to use Google for its default search, expanding Google’s share in the search arena.

Microsoft and Intel both benefit from co-opetition.  As more demanding software is created, the demand for faster Intel chipsets grows.  As the quicker chips are developed, more sophisticated software can be designed.

In each of these cases, these companies cooperate in some areas while competing fiercely in others.  They recognized they had mutual interests that could be better served by cooperating while maintaining a competitive approach in other areas of business.  Sony and Samsung worked together to share development and research costs to design flat-0screen LED TVs.  Later, when the cooperative effort was no longer needed, Sony sold its stake in the joint venture and went into direct competition with Samsung.

No Longer a Zero-Sum Game

The theory of co-opetition challenged the notion that to succeed in business, someone else had to fail.  The authors concluded that most companies succeed when others do, too.  This cooperation/competition cycle can make both companies stronger.

If you liked Co-opetition, please read about other classic frameworks by other famous authors and management thinkers.