Clayton Christensen’s Innovators dilemma concept is a classic management framework.  In this seminal book, innovation expert and Harvard Business School Professor Clayton M. Christensen revealed a startling truth:  even when the most successful companies in the world can seemingly do everything right, they can lose market leadership.  Most companies, Christensen says, will miss out on innovation.  No matter what industry you’re talking about, successful companies with established products get pushed aside unless leaders can abandon their traditional business practices and move in a different direction.

His book, The Innovator’s Dilemma:  When New Technologies Cause Great Firms to Fail, documents how disruptive innovation creates new and unexpected competitors that rise up and overtake markets.  The Innovator’s Dilemma comes from the paradox created by success.  The decision-making process and the allocation of resources that lead to success can be limiting when it comes to embracing innovation.  When confronted by disruptive technology, companies often fall into comfortable boxes.  They talk to their customers, who tell them there’s no need to change.  They track competitors, who they see not embracing innovation.  Instead, they invest their resource to build high-performer products that improve upon the designs that brought them success in the first place.

These are all good things to do, they can create blinders to new opportunities.  They allocate resources to things customers like and ignore the things they reject or that offer a lower initial profit.  Yet, these are often the underpinnings of disruptive innovation.

You may think the established companies fail to innovate and create disruptive technologies because they are unable to adapt or unable to identify emerging trends and bring them to market.  That’s not necessarily true.  Incumbents often do see the technology and develop it.  Where they fall short is when they fail to value the innovations because they are applying them within their existing infrastructure.  For example, they may try to layer innovations on top of existing products rather than creating new value networks.  As such, they may dismiss the ROI on innovations as too low to be worth the investment.

That’s why so many of the innovations come from startups or new market entrants.  Many of them are founded by former employees that saw the potential but were unable to drive it forward in established companies.  With nothing to lose, they embrace the potential.  They may operate at no margin or low margin and may indeed flounder for a period.  However, they are able to operate in an agile environment and change gears quickly as needed – something that’s difficult the bigger you are.

At first, these upstarts don’t pose a threat to the establishment.  However, when they find the right use case and customer base, they can enter even mature markets and be disruptors. 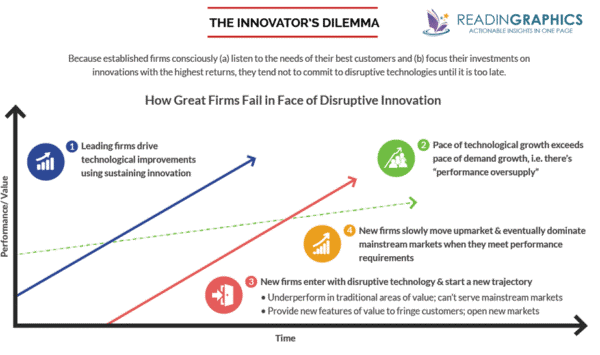 Examples of the Innovator’s Dilemma

When Toyota first entered the U.S. auto market, it started small.  The first launch was with the Toyota Corolla.  As the low-price subcompact vehicle started to grow, companies like GM turned their attention away from low-price and low-margin business to focus on larger vehicles and higher profits.  As Toyota made its mark in the subcompact market, it started to move upstream to compacts and larger vehicles.  GM again focused on its most profitable products.  In pursuit of profits, GM moved upmarket and got pushed out by Toyota as it contained to grow market share and move upmarket with more competitive products.

Perhaps the classic case of the Innovator’s Dilemma is Eastman Kodak.  While dominating the film market for more than a century, it wasn’t that they ignored the emergence of digital photography.  As a matter of fact, Kodak invented the first digital camera.  They feared, however, that it would undercut their profitable film business.  We know how that story ended.

Here are some of the common tenants that underpin the Innovator’s Dilemma:

As established companies focus on sustaining innovation – advances that improve existing products – they open to themselves up to disruption from those working on truly remarkable disruptions.  Once disruption emerges as a threat to incumbents, most fail to recognize it until it’s too late.  Disruption can often have a paralyzing effect on leaders.  Disruptive companies don’t start out going head-to-head with incumbents for customers.  They typically target new or low-end customers first.  Once it grabs a foothold in these markets, however, the disruptors may be on a journey to upend the incumbent.

If you liked The Innovator’s Dilemma by Clayton Christensen, please read about other classic frameworks by other famous authors and management thinkers.