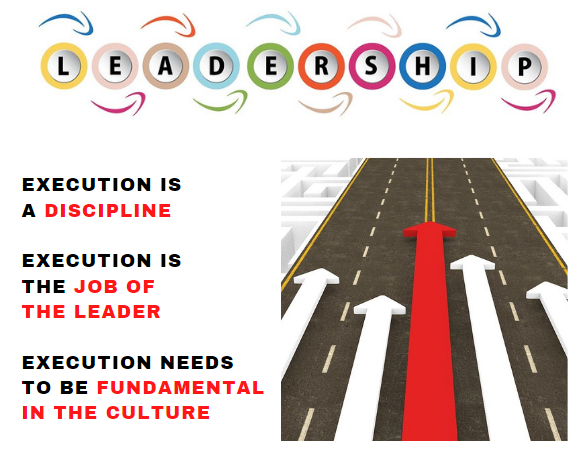 Flawless Execution is a critical success factor for most enterprises.

EXECUTION: The Discipline of Getting Things Done by Larry Bossidy and Ram Charan takes the position that a good strategy for a business is not enough. For success, you have to continuously focus on your Execution.

Before digging into this management practice, it helps to know the background of the two authors. Larry Bossidy has guided multiple companies to significant success. As CEO at Allied Signal, he transformed the company and was named CEO of the Year in 1998. He’s also had notable success as Chairman and former CEO of Honeywell International and COO at GE Capital. Ram Charan is an advisor to senior executives and boards of directors. He’s worked with companies, such as GE, Bank of America, DuPont, 3M, and Verizon.

There’s good news for leaders in Execution, based on the experience by the authors. Just like any other discipline, the ability to create a plan and follow it to accomplish great things is a skill that can be learned. However, it takes a slightly different mindset than most leaders are comfortable with.

Leaders often rise to positions based on their accomplishments within an organization. Once there, they develop a plan but too often view the Execution of an idea as something they can delegate to others. Execution, as it turns out, is not just tactical, it’s cultural.

Execution must be fundamental to an organization’s culture, and it must be driven from the top by understanding how to link people, strategy, and operations together. The real job of running a business, according to the authors, only begins at formulating a strategy. Bring that vision to fruition means being personally engaged and committed and foster a culture that focuses on processes that make the vision a reality.

Execution is the driver that brings the vision to life.

The people you surround yourself with are the biggest asset you will have. As such, the most critical job of any leader is selecting the right people. Bossidy doesn’t delegate reference checks on crucial hires. He makes them himself. To make the cut, they have to align with the core principles driving the business and be focused on Execution.

With this relentless focusing on executing the plan, the right people are committed to driving the business forward by implementing specific strategies to reach the overall goal. Rather than a budgeting exercise that too often looks backward, this management strategy looks forward to what it will take, sets a course for achievement, and holds people accountable for meeting goals.

Execution happens when the right leaders make the right moves at the right time.

Execution is a discipline you practice. It is the job of every leader within your organization and should be embedded in your corporate culture. People, product, and process are what makes companies successful or causes them to fail. Continuous attention to Execution keeps everyone on the same path.

When evaluating a company’s strategy, leaders must ask a series of questions and take an honest assessment. Besides tactics like SWOT assessments, companies need to take stock of their customers and markets, competitors, and the environment. It’s also essential to distinguish short-term and long-terms goals and show one connects to the other.

Even a great plan doesn’t succeed without Execution.

When companies fail, most will look at a CEO’s strategy and point to the gaps in the plan that prevented success. However, the approach itself may not be flawed at all. Often, it’s the Execution of the plan where things break down.

You can summarize this management strategy in three sentences:

Now just following these steps isn’t enough to build a successful company. You’ll need the right people on board, motivate an engaged workforce, and empower your team with the tools, discipline, and authority to make the right decisions.

None of this should diminish the strategy or plan itself. A great plan can act as a blueprint for success, but it’s the people and the Execution that brings it home.

If you liked Execution by Bossidy and Charan, please read about other classic frameworks by other famous authors and management thinkers.