The Theory of Disruptive Innovation

Disruptive innovation is a term used by Harvard Business School professor Clayton Christensen in his 1997 book The Innovator’s Dilemma, considered by many to be one of the most influential business ideas of the 21st Century.

“Disruptive Innovation describes a process by which a product or service initially takes root in simple applications at the bottom of a market—typically by being less expensive and more accessible—and then relentlessly moves upmarket, eventually displacing established competitors.” – Clayton Christensen

Unlike what you might think, disruptive innovations are not just about breakthrough technologies or changes to improve products. Instead, they are about innovations that create accessibility and affordability to products for mass adoption.

Christensen described the three factors that make for a successful Disruptive Innovation.

When products are cheaper and more straightforward, it has the potential to create chaos even in established markets and cause significant companies to lose market share or become irrelevant. Christensen noted that it’s not that established companies aren’t innovating themselves but rather that they are modifying or improving on existing products. These sustaining innovations make products better but aren’t going to be disruptive. 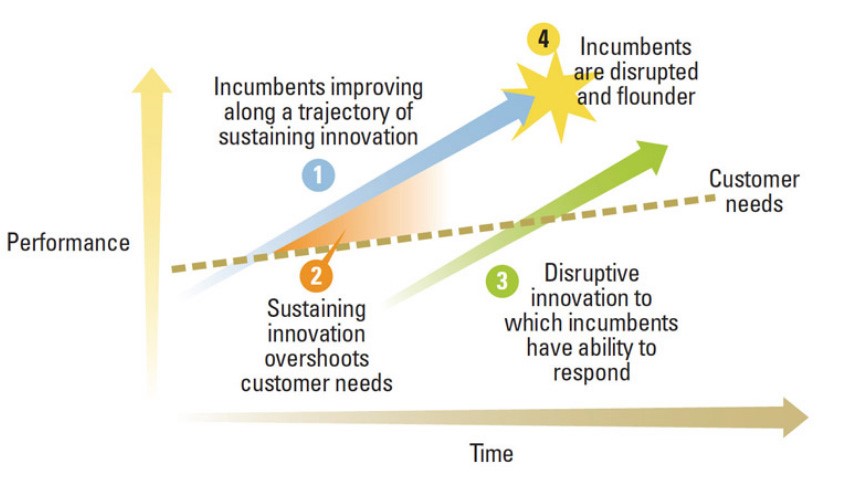 Disruptive innovation brings technology or innovation to a new group of consumers, often at a lower price point than previously possible. Over time, they may be able to increase pricing and even become a luxury product once a market has been established.

He points to inventions such as the Swiffer by Proctor & Gamble, Apple with the iPod, iTunes, iPad, and the iPhone, and the Xiameter brand of silicone products created by Dow Corning as examples of disruptive innovation.

Disruptive innovations typically have these attributes:

Often, these companies are dismissed or overlooked by established companies. It may take years or even decades before the idea catches on, but when it does, it can disrupt industries. Netflix upended Blockbuster by making movies easier to get. Now, they’ve disrupted the entire Hollywood movie infrastructure, and cable and satellite distributors with their streaming service and spawned a host of competition from major studios and companies.

The internet has produced several disruptive innovations. Amazon turned the retail world upside down, although it started just selling books. Its just-in-time printing innovation made books more affordable. Its Kindle device made them accessible instantly. Google disrupted the Yellow Pages with its free, ad-supported, online search engine. It’s become so ubiquitous that it’s become a verb.

People used to pay thousands of dollars for encyclopedias, which were outdated the second they were printed. When Wikipedia first emerged as a crowdsourced resource that was updated frequently, it was seen as low-quality and unreliable. Over time, the quality improved. When was the last time you even thought about looking at an encyclopedia?

Jobs to Be Done

Christensen’s additional work in this area added another critical concept:  Jobs to be Done. This stressed the importance of a focus on consumer’s needs. Disruption is a great way to start a company, he said, but not necessarily the best way to grow a company.

“When we buy a product, we essentially ‘hire’ something to get a job done. If it does the job well, when we are confronted with the same situation, we hire that same product again. And if the product does a crummy job, we ‘fire’ it and look around for something else we might hire to solve the problem.” – Clayton Christensen

He points to companies such as IKEA. When the job is to furnish an apartment quickly (like today or tomorrow), IKEA exists to do precisely that job. While it may have started as cheap, assemble-it-yourself furniture, you can spend $25,000 on a kitchen makeover. Amazon continues to innovate. It’s made free, two-day shipping a stringent standard for other companies to emulate. It’s flirted with drones and offers two-hour delivery in some cities. Amazon focuses on when orders are delivered rather than when they are shipped.

If you liked The Theory of Disruptive Innovation by Clayton Christensen, please read about other classic frameworks by other famous authors and management thinkers.